Out but Not Down: Karina Smirnoff, from Dancing With the Stars Gets Engaged

It seems like the contestants of ’Dancing with the Stars’ keep waltzing right into the hearts of their significant others, either that or there is something in the water on set, because yet another cast member has announced her engagement.
Hot on the heels of former contestant, turned DWTS correspondent, Nicey Nash, who announced her engagement this past September, professional dancer, Karina Smirnoff is sporting a new diamond ring as well.

Smirnoff, a professional ballroom dance and instructor on the show, publically debuted her ring at a party at Tao in Las Vegas over the weekend. Although her fiancé, professional Baseball player Brad Penny, couldn’t be with her, he was definitely on her mind, thanks to the 4.5 carat Princess cut, platinum diamond ring he gave her.

What makes the ring unique, however, is the channel set diamonds on the band. The use of channel set, which could be considered less popular than the more prevalent pave’ set, can be seen in Verragio’s Classico 0069P, which features smaller Princess cut diamonds, set into the band and placed flush against one another, unlike Pave’, which separates by the use of prongs. 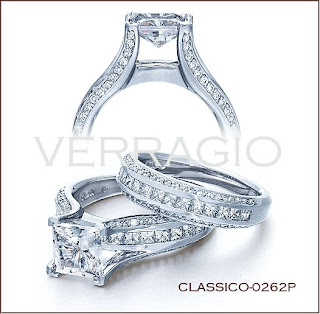 The beauty of the channel set is that the diamonds on the shank flow in a continuous line up the band, but for those who just can’t make up their mind, the Classico 0262P combines the best of both worlds. The Princess cut diamond center, set in Verragio’s exclusive Lumino setting, sits atop four prongs that are pave’ set on one sides and channel set down the middle of the shank. No matter how you set it, that ring has a lot of sparkle.

But Smirnoff’s engagement ring and fiancé seem to suit her perfectly. She recently told Us Weekly that despite being voted off this season on DWTS, things couldn’t be going better. “I’m the happiest I’ve ever been,” she told the magazine. “And Brad is the sole reason for that.”

Copyright © 2021 Verragio News - All about engagement rings and wedding bands.