Actor Josh Duhamel has been busy filming the third installment of the Transformers movie franchise while his wife Fergie continues to work with the Black Eyed Peas and most recently was spotted filming a commercial for Dr. Pepper. But hopefully, these two will find a little time in between projects to celebrate their second wedding anniversary last night.

The couple, who first met when The Black Eyed Peas filmed a guest spot on “Las Vegas”, the television show Duhamel starred in at the time, has been together since 2004.  But it wasn’t until 2007 that the pair confirmed that they were indeed engaged, and on Saturday January 10, 2009 the two exchanged wedding rings in a fantasy forest themed wedding. 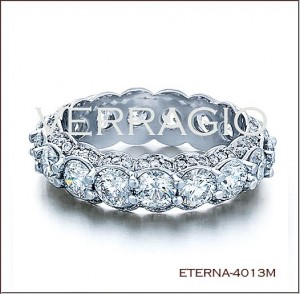 The bride and groom both wore Dolce and Gabbana, while in very rock star-esque style; the ten bridesmaids wore contrasting shades of black.  The ceremony took place under magnolia trees filled with roses at the Church Estates Vineyard in Malibu in front of Duhamel’s family from North Dakota, as well as some familiar famous faces.

Duhamel gave Fergie a narrow diamond wedding band to pair with her custom designed, 4 carat Round diamond engagement ring,  and in turn Duhamel now wears a white gold band with a brushed finish.

Vanessa Marcil, Molly Sims, and James Caan, costars of Duhamel’s, as well as members of Fergie’s music group The Black Eyed Peas, were all in attendance for the reception, which took place in a tent decorated to look like a forest and a ceiling covered in lights.

The couple has weathered their fair share of gossip since then, and in 2010 celebrated their anniversary by renewing their vows on a beach in Santa Monica.  With two years of matrimony under their belt now, there is no telling how they will choose to celebrate, but there is no doubt that these two still look like one of Hollywood’s happiest couples.  Happy Anniversary to Josh Duhamel and Stacey “Fergie” Ferguson.