There seems to be two categories of female celebrities this year, those getting engaged, and those that are announcing they are pregnant; either way love is in the air.

Ivanka Trump, daughter of New York City real estate mogul Donald Trump, has recently announced that she is joining the latter group, and she and her husband, Jared Kushner are expecting their first child.

Trump took to Twitter to announce the good news on January 21st.

“I have been wanting to share some amazing news with you all for some time … I’m pregnant,” she tweeted. “Jared and I couldn’t be more excited.”

Twitter seems to be her favorite vehicle for announcements, after using the social media site to announce her engagement in July of 2009.

“I got engaged last night…truly the happiest day of my life,” she tweeted.

The day before, Kushner, for whom she had converted to Judaism, surprised her with a 5.22 carat, Cushion cut diamond ring with pave’ set diamonds on the thin Platinum shank.

A mogul in the making herself, the young Trump married The New York Observer owner on October 25th, 2009 at the Trump National Golf Club in Bedminster N.J. in front of 500 guests, including Russell Crowe, Natalie Portman, Barbara Walters and Regis Philbin.

The bride was dressed in a Vera Wang gown inspired by Grace Kelly, and Barbara Walters later described the wedding as “absolutely gorgeous” but not “glitzy.” She further shared that the normally bombastic father of the bride was very “low-key” for the day.  If his speech was any indication, she was probably right.

“Be happy,” he simply told the couple.  “And enjoy your life.”

The younger Trump told PEOPLE in a 2009 interview that she was in no way ready to be a mother due to her career.

“When our time to have a family comes around, I know I will compromise,” she told the new source.

But it seems that a little over a year later, the time is right and she and Kushner are following her father’s advice. 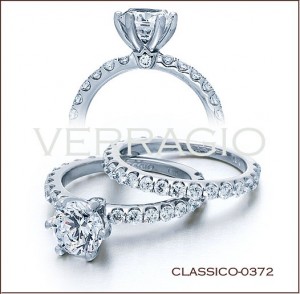 Trump, a fashion maven who has a jewelry line of her own, seemed to have been ahead of the times with her engagement ring though, as cushion cuts are poised to be big in 2011.  Her simplistic style is echoed in the Couture 0372 engagement ring  from Verragio; normally shown with a classic Round cut diamond center, this elegant design can be easily made to sit a cushion cut onto the pave’ set Round diamonds that adorn the thin band, much like Trump’s.