There has recently been a significantly increased global demand for ethically sourced and well-graded emeralds, as is evidenced by the 141 percent increases in sales of rough and finished emeralds for the six months ended December 2010, the London-based company, Gemfields reported this Monday.

Sales for the six month period more than doubled the sales for the entire previous year, with a reported $29 million versus the $12 million for the year before.  And Gemfields was undoubtedly happy to announce a pre-tax profit of $15.5 million, compared to a loss of $5.8 million a year earlier.

In fact, the almost unexplained phenomenon has enabled the company to pay off all of its bank loans and leases, leaving them to operate debt-free.

The trend may have been spurred on by an auction that took place in December, whose reported, record breaking sales of $19 million were higher than all three emerald auctions held by Gemfields from 2009 to 2010, combined.

Celebrities have even been seen sporting the deep green gemstones on the Red Carpet at the Oscar a few weeks ago, like Reese Witherspoon who went minimalist, forgoing a necklace and wearing only diamond and emerald earrings.  But it was Amy Adams, one of the night’s big nominees, that really set the trend when she wore a bracelet with 30.75 carats of emerald and 21.5 carats of diamonds, as well as a platinum necklace with a 33.24-carat emerald and 15.38 carats of diamonds.

However, the trend isn’t just restricted to the red carpet though.  At Verragio we have had more custom pieces that incorporate the deep green gemstone into engagement rings, such as our Insignia 7005, which features a large square cut emerald center, set into a halo of Round cut diamonds. 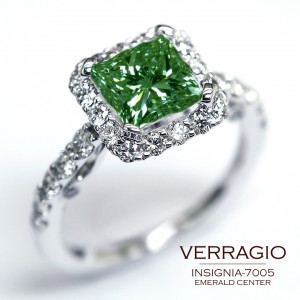 Although Gemfields has no plan to host another high-grade auction in the next six months, there will be a lower grade auction held in Jaipur, India this spring.