The Long Trip to the Altar: Prince William and Kate Middleton are Husband and Wife

It was the fairytale wedding ten years and four months in the making, and early this morning, the 2 billion people around the world who watched Prince William finally marry Kate Middleton, were not disappointed.  Chants of “We want Kate” met the newlyweds as they appeared on the Buckingham Palace balcony to greet the crowd, and thrill them with not one, but two kisses. 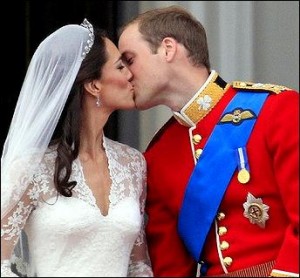 However earlier in the day, over 5,000 spectators lined the streets of London to catch a glimpse of Middleton in her gown, after months of anticipation and speculation, on her drive to Westminster Abbey.  The wedding gown, as well as the designer, was a closely guarded secret for months, due to Middleton’s desire to surprise her fiancé at the altar, as is every bride’s prerogative.

Rumors were rife with Sarah Burton’s name since the beginning of March, but the cat was officially let of the bag yesterday when Burton, the head designer for Alexander McQueen, was spotted leaving the Goring Hotel where Middleton spent her last night as a single lady.

The guest had been arriving for hours, filling the pews of Westminster, as celebrities like Elton John, director Guy Richie, and of course David and Victoria Beckham took their seats to wait for the bride.  However nobody had waited longer for this day, than the bride herself.

The newlyweds first met while they were both students at The University of St. Andrews in 2001, and the Prince and the ‘commoner,’ as the British press liked to call her, began a romantic relationship that, despite a brief break-up in 2007, lasted a decade.

And today was Kate’s day as she was led down the aisle by her father and followed by her sister Pippa who was in charge of the stunning gown’s nine foot train.  The gown itself was made with individual flowers hand-cut from lace and hand-engineered onto ivory silk incorporating the rose, thistle, daffodil and shamrock.

The flowers in her actual bouquet were picked by Kate for their significance to the royal family and the meaning of each chosen blossom.  The Sweet William means gallantry, lily-of-the-valley means return of happiness, hyacinth symbolizes constancy of love, while the traditional sprig of myrtle that is incorporated into every royal bride’s bouquet, is the emblem of marriage and love.

And as she approached the altar William leaned across to whisper, “You look beautiful.”

Much later, the public fanfare ended in a surprise that some say would have made his mother, the late Princess Diana proud; William personally drove his young bride to their reception in a classic convertible.  With bows and balloons streaming behind, and the words ‘Just Wed’ on the license plate, the couple drove to Clarence House in a 38-year old, open-top Aston Martin, which was given to the father of the groom, Prince Charles, on his 21st birthday.

Two hours earlier though, as the couple stood on the balcony above the crowd, the people cheered for the fairytale romance of the commoner who became a princess.  So for the girl once tormented by the press with the nickname ‘Waity Katie’ it seems that even after ten years, it was well worth the wait.