Brown Diamond Engagement Rings to Make a Splash in 2011?

The year 2011 is not even a month old yet, and already the year’s hottest styles are already being developed, decided, and announced.  The fashion world likes to move fast, and it is no different for jewelry fashion.

Champagne diamonds are really just a light shade on the natural brown diamond scale, which reaches from champagne to deep cognac, or sometimes called chocolate.  Their climb up and into the spotlight was relatively short but tough one, and comes up from an industrial past.

Considered unattractive for a long time and therefore not marketed for jewelry, it wasn’t until the opening of the Argyle mine in Australia that public opinion began to change in regards to brown colored diamonds.

Argyle, which is well known for its production of pink diamonds, accounts for 1/3 of the world’s diamond production, with 80% of those diamonds being of brown color.  After the development of the Argyle mines in 1986, popularity of champagne diamonds slowly began to rise.

The sudden demand for brown diamonds cannot be pinpointed by one event however, but can most likely be attributed to celebrities, especially trend setters like Shakira, who was seen wearing brown and white diamonds at the last Bambi Awards to compliment a gold outfit.

Other big names in pop culture, like Serena Williams and Paris Hilton have been seen wearing various shades of brown diamonds, but it was Kristen Bell that took the trend in a matrimonial direction.  The actress best known for her roles in movies like “Forgetting Sarah Marshall” and “When in Rome” has been spotted since January of 2010 wearing a stunning brown diamond engagement ring.

The ring fiancé, actor Dax Shepard, gave Bell features a 3 carat, Emerald cut brown diamond center, with a row of smaller white diamonds on each side, and set onto a platinum band, and has since been named as one of the top 10 engagement rings of 2010.

The versatility of the color of lighter shades of brown diamond, such as champagne, offers people the chance to get creative, much like Shepard, and the Couture 0378  from Verragio is a perfect example of how to set a champagne diamond center without losing any style.  The engagement ring holds a square cut center, such as Princess, Radiant, or Asscher cut, in four unique prongs that almost seems to fold over at the corners.  The design is completed by a split shank adorned with pave’ set diamonds halfway down the band. 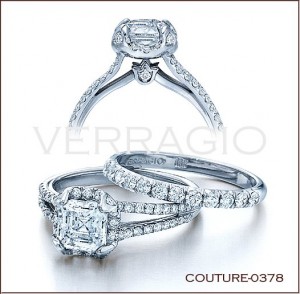 A custom Eterna 7012W from Verragio also makes a welcome idea for an anniversary or birthday present, and swapping out the white diamonds for champagne colored ones adds a person touch for any trend-setting lady.  Featuring a total diamond weight of 1.5 carats, which consists of smaller Round cut diamonds placed along the band, the lustrous brown would pair well with yellow gold or pop with platinum, depending on her preference.

So if fashion forecasts are to be believed, it seems like 2011 will be a big year for Champagne diamond engagement rings to come.

This entry was posted in celebrity engagements, diamonds, engagement rings. Bookmark the permalink.