The Year’s Hottest Wedding Bands for Her

The holidays are one of the most popular times of the year to propose, as is evident by the rash of celebrity engagements  that have been announced in the first month of the year.  And as the saying goes, ‘first comes love, then comes marriage,’ which would explain the hottest and the latest wedding ring designs that have been showcased as of late.

Twisted shanks have been popping up on celebrity engagement rings  like Portia de Rossi and Jenna Dewan in the past couple of years, and now the look has become popular all on its own as a wedding band.  The idea is that the ring appears to have been split into two parts and inter-braided, or twisted, to create a unique look.  Such as the Eterna 4017 from Verragio, which features two delicate shanks twisted together and adorned with small pave’ set diamonds that carry all the way around. 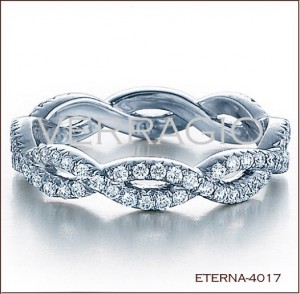 Eternity bands are also pegged to be the next big tend in 2011, in which the diamonds would continue to carry all the way around the band.  The appeal of this style is mostly aesthetic because the diamonds can be seen from any angle, whether from bird’s eye view or palm upwards.  The fear of an eternity style wedding ring though, is that the diamonds could fall out or become damaged due to contact with harder surfaces.  That is why there are some styles, like the Eterna 0005B from Verragio, that take pains to protects the diamonds.  The larger Round diamonds in this design are alternated by two smaller Round diamonds that placed side by side, creating the illusion of more oblong diamonds.  And in order to ensure their safety, the metal prongs that hold the diamond in place also extend farther out than the diamond to prevent direct contact or ensuing damage.  This small but thoughtful feature affords the wearer style and function.

However, for those that love the sparkle of diamonds on their wedding ring, but only on top, wedding ring designs that feature larger clustered diamonds halfway around are making their mark in the industry lately.  Many wedding diamond encrusted wedding bands are being especially designed to fit together with the engagement ring.  The Couture 0410R, for instance, feature larger Round cut diamonds set on either side of a Round cut diamond center, and travels halfway down the band.  Available also from Verragio, is the matching Couture 0410W, which has 10 Round cut diamonds covering the top half of the shank, in the same size as the engagement ring, but also stops exactly where the diamonds on the engagement ring stop; halfway around.  The cluster on top may look like a tiara like design when in hand, but when on that special third finger it creates the illusion of an eternity band without the pressure of having diamonds all around.