Some Royal Wedding Traditions aren’t Meant to be Broken

Although Prince William and his fiancé Kate Middleton are determined to make their royal wedding, set for the April 29th, as up-to-date as possible, by breaking traditions and thereby modernizing the public’s perception of the monarchy, celebrity new source PEOPLE points out, some rules are not made to be broken.

According the British Folklore, the Myrtle plant will only grow if it is planted by a woman; this derives from Greek and Roman mythology which claims that Myrtle was the favored by the Goddess of Love Aphrodite and Venus.

It is no wonder that it has become tradition for royal brides to place a sprig of the evergreen in their wedding day bouquets, a tradition followed by William’s mother Diana and his grandmother Queen Elizabeth before her.  And while there has been no confirmation on if Middleton will carry on this tradition, but a spokesperson for the site of the original myrtle bush, Osborne House, tells PEOPLE they would be more than happy to help out.

“It is a long running tradition and we would be honored to supply Kate Middleton with some myrtle for her big day,” they said.

Speaking of bouquets, when Queen Elizabeth was married at Westminster Abbey in 1947, she had the entire floor covered with fine carpeting, except the grave of the ‘Unknown Warrior,’ which contains a body brought from France to be buried in England in 1920.  The day after her November 20th wedding, Queen Elizabeth, Princess then, sent her bouquet to be place on warrior’s grave, a tradition her mother started.  William’s mother, Diana, did not carry on the tradition; however she and Charles chose to exchange wedding rings at Saint Paul’s Cathedral instead of Westminster.

And finally we come to the wedding rings.  It has always been tradition that a royal bride’s wedding ring should contain Welsh gold from a special royal family reserve.  Since the late Queen mother’s wedding in 1923, royal bridal bands have contained gold from a mine in Dolgellau, North Wales.  This rare gold comes from a mine that contains copper, producing gold with a pink tinge.  Ben Roberts, Managing Director of the company did not confirm if the young couple will carry on the tradition, but he did share with PEOPLE that he has offered the company’s services. 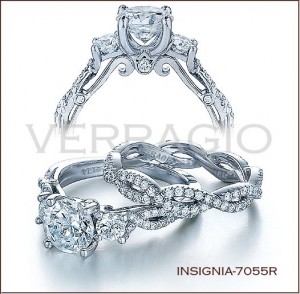 William and Middleton have so far done their best to make this a wedding for the people, swapping the glass carriage for a car, a sit down dinner for a buffet, and only inviting friends of the family instead of world dignitaries, such as President Obama, just for show.  So it is not hard to see how easily the couple could disregard certain antiquated traditions, but taking into consideration that Prince William proposed to Middleton with his mother’s iconic Sapphire and diamond engagement ring,  it is just as easy to imagine that there is a bit of sentimentality in this young couple.

Copyright © 2021 Verragio News - All about engagement rings and wedding bands.