As most of the world already knows Prince William and Kate Middleton will be exchanging vows and rings (well one ring, as William has announced that he has chosen not to wear a wedding ring) and with just two weeks to go until the most talked about wedding in decades, preparations are under way.

Barricades have already been constructed along the procession route the couple will travel after the ceremony, the bachelor party has been had, the bride’s “Hen-do’s” location announced and rehearsals have even been observed at Westminster Abbey. 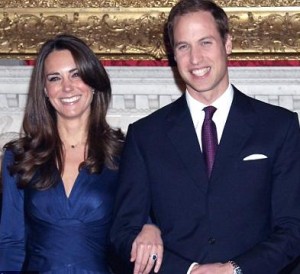 More ridiculous occurrences have arisen of course; talk of Middleton’s diminishing figure culminating in the resizing of the royal Sapphire and diamond engagement ring has captivated the media, and a certain Jellybean is looking for a new home.  Yes, someone has ‘discovered’ a Jellybelly bean that bares a passing likeness to Middleton herself, and can be yours should you wish to bid on Ebay; the starting bid is $815.  The flavor is Mango, in case anyone is interested.

For those who are interested in this matrimonial occurrence but cannot exactly make the trip ‘across the pond’ to participate in the festivities can find plenty Royal Wedding activities to do right in the USA.  Our own home of New York City is offering plenty to keep the celebration going all day long.

The London NYC Hotel, for instance, is offering a private in-suite royal wedding celebration, which includes a traditional English breakfast, an English floral bouquet, champagne, and truffles; all served during the early coverage of the wedding.

The iconic Waldorf Astoria is offering the chance to throw a 40 person, formal cocktail party on the evening of April 28th, including traditional British fare, to be held in the newly renovated Royal suite, once the home to the Duke and Duchess of Windsor.

However, if your more in the mid to be with a crowd, Time Square will be transformed into a giant viewing party, thanks to TLC, with guest host Randy Fenoli, from the channel’s hit series “Say Yes to the Dress.”  The day will include a “Say Yes” fashion show, and three lucky couples will exchange wedding rings while singer Colbie Caillat performs.

If you are in the DUMBO (Down Under the Manhattan Bridge Overpass) Royal Wedding Celebration Party will be taking place, function is hosted by Big Apple Brits, a networking group for Brits living in New York City. You can watch the live wedding broadcast on a big screen at the archway under the Manhattan bridge, where it will be replayed again in the afternoon.

Finally, restaurants throughout the city, including the corner of the West Village known as ‘Little Britain,” will be serving special menus offering traditional British dishes throughout the weekend.

So even an ocean and many social circles away, we can all still have a little taste of the Royal wedding of the world’s most famous Prince and his fairytale bride.